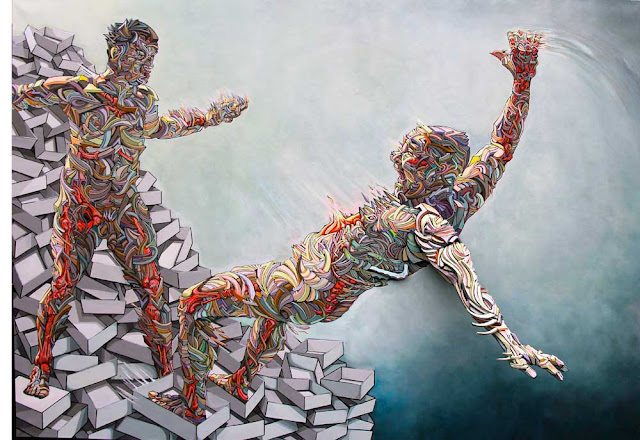 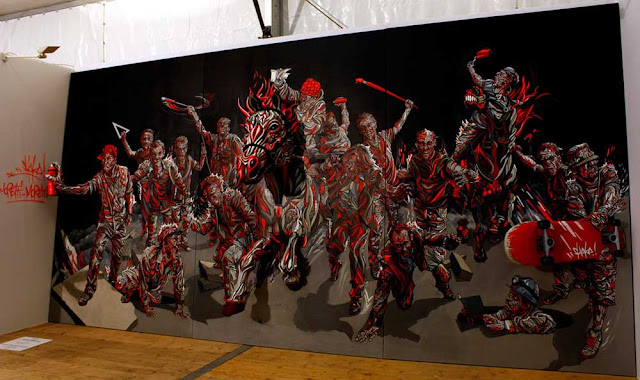 gallery nine5 is pleased to present a series of recent works by renowned French artist Shaka. Already an established name on the underground scene in Europe and South America, this will be the first time that Shaka will exhibit his bold style in North America.

Shaka focuses on portraiture and figures in movement to reveal the emotional workings behind the façade of everyday human interactions. His figures twist and turn in an energetic color palette, the movement of their bodies representing the struggle for individuality in social power politics. Heightening the internal conflicts of each figure, the paintings feature bas-relief details that pop out from the two-dimensional plane, underscoring the sense of escape and emancipation.

The exhibition centers on an impressive triptych titled Street Allegory. Constructed from oil and plaster, the piece is a composition of impassioned figures charging out of the picture plane to fight against dominant classes and social structures. The high contrast of the piece is amplified by the influence of red on an otherwise achromatic canvas. The figures appear to be a mob in pursuit of the viewer; their faces contorted in acute anxiety. The cohesion of the mob is just an illusion though, as we are tricked by the balance of the composition into believing we see a single group when in fact each member is fending for himself. The piece is a commentary on the mirage of community experienced through political constructs, while also a nod to the stereotypes of the street art movement, which has gained recent mainstream exposure. Dominant language relegates “street artist” to a single category ignoring the diversity in style, motivation, and creative ambition of each individual.

Shaka has been practicing his unique method of sculpting right on the canvas since 2007 in the heart of Paris’s burgeoning contemporary art scene. He mixes technical elements and classical influences with new-age styles like tattoo design and graffiti culture. Shaka’s wide net of inspiration allows him to infuse his work with a commanding presence. Besides the large-scale format that is emblematic of his style, his work is known for a pulsating menagerie of polygons, lines, and angles infused with radiating colors. These elements reflect the inner conflicts of each of Shaka’s subjects who are searching, presumably like us, for individuality, while simultaneously living within communities organized by social norms. In Human Behavior, for example, two figures try to balance on top of two hills of empty drawers. The structure is unstable and ultimately both figures will fall. Shaka has painted a physical manifestation of the inner instability of his subjects.

Shaka (Marchal Mithouard) was born in Evry, France in 1975. He graduated with a BFA in Fine Art from the Sorbonne, where he graduated with a Masters in Multimedia Arts as well. Shaka has exhibited his work in galleries (and on the streets) all over Europe including Paris, Brussels, Berlin, London, and Rio de Janeiro.

Posted by jamie.jamieforbes@gmail.com on October 12, 2012