Fine Art Magazine Home
Rep. Bill PASCRELL to Host
CONGRESSIONAL ART COMPETITION
High school students will showcase workat prestigious Montclair State University Gallery MONTCLAIR -- U.S. Rep. Bill Pascrell, Jr. (D-NJ-08) is proud to announce that he will host his Annual Congressional Art Show and Competition at Montclair State University’s George Segal Gallery on Friday, April 30 at 6:00 p.m. Students from the following high schools who have submitted work for the contest will be present: Bloomfield High, Cedar Grove High, International High, Eastside High, John F. Kennedy High, Academy of Law and Public Safety, Livingston High, Montclair High, Nutley High, PANTHER Academy, Passaic Valley High, Passaic County Tech, Rosa Parks High, Wayne Hills High, Wayne Valley High, West Orange High, Seton Hall Preparatory High The competition in Rep. Pascrell’s congressional district is part of a nationwide program that is held in many of the 435 congressional districts in the United States. The first place artist will have his or her artwork displayed in the United States Capitol Building for one year along with the winners of the competitions from across the nation. The runner up to this year’s competition will have his or her work displayed in Rep. Pascrell’s Paterson office. 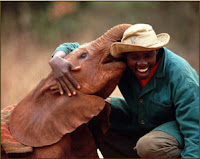 Remember every time a species goes extinct the sound or the universe we all hear daily is altered.

Elephants, Whales, the ancient great mammals live in family units, groups. When they are gone and the earth can no longer support us or our greed gets the better of the "Environment" our lives will exponentially alter. It will be, duller , different, with out delicate differences and nuance we don't have full awareness of. .

Like small children with out an understanding of the ramifications of our actions or the ability to take responsibility we are carelessly diminishing the exquisit beauty our world.

The site above is addressing these issues. I think it is a good one. Ck it out
in reference to: The David Sheldrick Wildlife Trust: A Haven for Elephants and Rhinos (view on Google Sidewiki)
Posted by Fine Art Magazine on April 26, 2010 No comments: 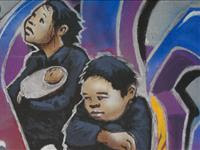 CineWomen On Screen:
A NYWIFT SeriesEvent: Tuesday Apr. 27, 2010
NYWIFT/ This screening series celebrates the work of emerging female filmmakers from all over the world. Films that are included in the series must be directed, co-directed, produced, written, edited or shot by women. Whenever possible, the filmmakers are present for discussion and socializing after their works are presented. There will be a Q&A following the screening, and an after-party to follow, with Cash Bar and complimentary food @:
Dempsey's Pub, 61 2nd Avenue, between 3rd and 4th Streets.
This month, CineWomen on Screen: A NYWIFT Series salutes Asian Pacific Heritage Month with a selection of two short films that take a sharp look at cultural identity.
UnderpassDirector: Rain Breaw15 minutes
A family that survived the Cambodian Khmer Rouge has rebuilt their lives, establishing themselves in San Diego. The son, Sann, tormented by memories of the killing fields, copes with his anger by painting violent graffiti on a city underpass. When his mother reaches out to an illegal immigrant from Central America, Sann must confront his fears without destroying his family.

Rain Breaw is an independent film director/producer currently working with Laura Ziskin Productions on the Stand Up 2 Cancer initiative. She is also working on PSAs and music videos, in addition to preparing her first feature. A graduate of the USC MFA Production Program, Rain has produced the feature Mr. Sadman and numerous shorts. 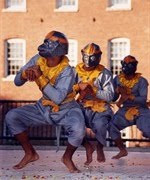 Monkey DanceDirector: Julie Mallozzi65 minutes
Three Cambodian-American teenagers come of age in a world shadowed by their parents' nightmares of the Khmer Rouge. Traditional Cambodian dance links them to their culture, but fast cars, hip consumerism and new romance pull harder. Gradually coming to appreciate their family's sacrifices, the teens find a balance between their parents' dreams and their own.

Julie Mallozzi's films explore the fluidity of cultural identity and historical memory. Her subjects are often people who, displaced from one country to another, manage to succeed in their new circumstances.  She is interested in the ways culture relates to contemporary problems.
Produced by Alison McMahan and Ylana of the CineWomen Screening Committeehttp://www.fineartmagazine.com/index.php?cID=1Fine Art Magazine Home
Posted by Fine Art Magazine on April 25, 2010 No comments:

Fifty-eight international galleries exhibiting hundreds of artists from all around the globe have been exclusively chosen for this year’s fair by the Selection Committee. The exhibiting galleries include both emerging and established artists with young and innovative programs.�
One man shows or presentations include: Alessandro Dubini Limited Edition, Atelier Terminal, Kehrig Fine Art, Neue Kunst Gallery, Koltchine Studio,Studio Rozga, Studio Sole, Art Valeri, Studio Bruton, Edward Waites Sculptures, Danny BrownSculptures, Studio Borkowska, Atelier Kalliste.�
Here is a preview of some of multi and solo-artist exhibitors that will be present as of April 29 at�Art Monaco’10:�
Enquires:�
info@artemonaco.com Nice: 33 (48) 306 6230 / New York: 1 (347) 332 6907�
DATES:�
WHERE Grimaldi Forum - Monaco�
WHEN Thursday April 29, 18:00 to 22:00 (VIP Reception)�
Friday April 30th, 10:30 to 20:00�
Saturday May 1st, 10:00 to 20:00�
Sunday May 2nd, 10:00 to 19:00�"
Posted by Fine Art Magazine on April 25, 2010 No comments:

This summer 13 European galleries will find their temporary home in the harbour part of Reykjavik, establishing an international art district for a month.

You are most welcome to attend the exclusive week of openings, performances, concerts, and meetings. See you there!

**EXTENDED**
DEADLINE FOR ENTRIES:
SUNDAY, APRIL 18, 11:59PM EST
CALL TO ARTISTS:
JURIED DRAWING &
PRINTMAKING EXHIBITION
JUDGED BY SHERRY CAMHY
MAY 14 - MAY 19
OPENING RECEPTION: FRIDAY, MAY 14, 6-9PM
NOW ACCEPTING SUBMISSIONS!
Following the success of our 2009 series of group shows, and glowing press, Rogue Space Chelsea hosts the second in a series of International group with Prints and Drawings, May 14th - 19th.
40 artists will be selected by our juror SHERRY CAMHY for the group show at Rogue Space.
This will be the second in a series of four media specific shows comprising of Photography (April 16-21), Drawing and Printmaking (May 14th-19th), Painting (June 4th-9th) and Sculpture (June 25th-30th).
Five artists from each show will go forward to a "Best of Show" Exhibition featuring 20 works, from which one artist will be chosen to receive a weekend solo show at Rogue Space | Chelsea and a documentary film produced by our sister company FilmsOnArtists.
ABOUT THE JUROR: Sherry Camhy's work is in the permanent collection of The New Orleans Museum of Art, The Israel Museum,Jerusalem, The Telfair Museum, Savanah, Ga. and has been exhibited the Parish, The Aldrich and The Katonah Museums, The Eleanor Ettinger, Sherry French Gallery. It has been featured in "The Nude in Contemporary Art", Drawing Magazine, FineArtConnoisseur and reviewed in ArtNews, Penthouse, The New York Press. She is the author of "Art of The Pencil" and has taught at The Art Students League, New York University Tisch School of the Arts, The New York Academy, The School of Visual Arts.
Posted by Fine Art Magazine on April 18, 2010 No comments:

On Saturday, May 15, 2010, the New York art world invades New Jersey in mass exodus, leaving behind a cramped Manhattan for the wide open spaces of Paterson, NJ.

Open to the public each weekend through June 19, 2010, at 24 1/2 Van Houten Street in the Great Falls Historic District

SEE: Mirror, mirror on the wall: Show humanity to us all
WEST PALM BEACH, Fla. (April 16, 2010) — Bernd-Hans Born, owner of Bevel Craft in Lake Worth, Florida, unveiled his “Mirror of Humanity” at a recent luncheon honoring Red Cross donors who have given major gifts to support earthquake relief in Haiti. Created out of his love for the work of the organization around the world, Born’smirror features 1,300 glass pieces laid carefully in the form of a Red Cross flag. The artwork illustrates four symbols used by sister Red Cross societies around the world: the Red Cross, the Red Crescent, the Red Crystal and the Red Star of David; each emblem used in different geographic locations around the globe to afford protection to people affected by disaster and those assisting them.
Valued at $50,000 and measuring over 24 square feet, the stunning hand-beveled Mirror of Humanity was made possible using rare tools and machinery. “Beveling is a lost art,” said Born, whose glassworks are reproductions of antique mirrors. “The Mirror of Humanity started as a design on a wood board, and then each piece of glass was polished and cut to fit into the design, and then beveled to give the mirror a special look.” The beveling process, which involves patiently cutting glass at an inclination to form angles other than 90 degrees, creates a crystal-like refulgence and iridescent shimmer. Born, who is also a Red Cross volunteer, hopes people across the country will support the organization by having their names engraved on the mirror’s many pieces. He plans to donate all money raised by the Mirror of Humanity back to the Greater Palm Beach Area Chapter of the American Red Cross after touring the mirror around the country.
The Red Cross is the world’s largest humanitarian network, made up of 186 Red Cross and Red Crescent national societies and more than 97 million volunteers. Red Cross societies around the world abide by seven fundamental principles: humanity, impartiality, neutrality, independence, voluntary service, unity and universality, while educating the public about the Geneva Conventions and the fundamentals of International Humanitarian Law. In a world where warfare and civil strife are a daily reality for millions, the American Red Cross made a difference by teaching 91,361 people last year about the important principles of International Humanitarian Law. The American Red Cross also utilizes an International Response Fund which enables the non-profit organization to respond to disasters around the world, such as recent earthquakes in Haiti and Chile.
To learn more about the Mirror of Humanity, call Stephanie Langlais, Director, Donor Development, for the Greater Palm Beach Area Chapter of the American Red Cross at 561.650.9137.
Posted by Fine Art Magazine on April 17, 2010 No comments: