Posted by Fine Art Magazine on February 28, 2017 No comments:

Posted by Fine Art Magazine on February 28, 2017 No comments:

This is a nice story!!!Patrica Qualls' life: the privilege of lifelong learning, hard work and perseverance. 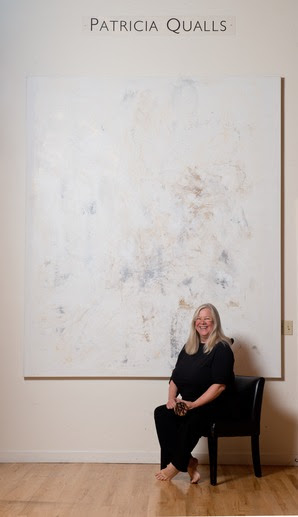 From humble beginnings on a farm, to a Ph.D., and an internationally collected artist, there is an underlying theme that has resonated throughout artist Patricia Qualls' life: the privilege of lifelong learning, hard work and perseverance.

Qualls is a nationally and internationally known expressionist artist with art in collections in Switzerland as well as in New York, Los Angeles, Chicago, San Francisco, Boston, Phoenix, Dallas, Vail, Sun Valley and Palm Desert, among others. Her work is also part of the George Blair permanent collection at the Crocker Art Museum in Sacramento.

Qualls' paintings are large scale and bold. Some of her series' emphasize powerful strokes of color and texture, while others are more subtle with washes of cream and shades of white. While her style is unique, some of her series could be likened to styles found in the great expressionist artists of the early-to-mid 20th century such as Sam Francis, Helen Frankenthaler, Hassel Smith, Joan Mitchell and Jackson Pollock.

She opened Patricia Qualls Contemporary Art, a 1,400-square-foot studio/gallery in 2008 in Carmel Valley Village in Monterey County. The studio/gallery's large, open-beamed ceiling with 15-foot walls allowed her to produce the large scale paintings. 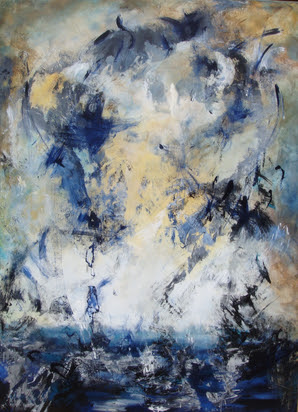 “I love the physicality of painting large...There is something about being able to use my whole body, there is so much synergy...to have room to move...it's like dance...to be fully engaged with my whole being. I don't have to sit in a chair, and at the end of the day I feel like I've had a good days work. I am so blessed to be able to do this!”

It’s no question where Qualls' work ethic comes from. “I grew up on a farm in Middle Tennessee and there's not much play time on a farm. We used to work seven days a week, which is what I do now as an artist at age 62. It's amazing that I have a profession that brings me such fulfillment,” says Qualls.

After life on the Tennessee farm, Qualls left for a job in Nashville. In 1980 she went on a blind date with a man who happened to be from Carmel. “That changed my life,” she says.

Qualls moved to Carmel, and began the process of personal growth and deep lifelong learning. The precious time with great therapists, kind professors and brilliant mentors opened the door to a life that seemed impossible to ever imagine.
She has an executive MBA from Pepperdine University and a Ph.D. from the California Institute of Integral Studies.

Part of her passion as a therapist entailed holding “Life Presence” 4 day retreats. One of the retreats included a group of artists and it had a profound effect on her.

“I realized I needed to do something creative and playful,” she says.

So she took a class on “intuitive painting,” and that was all it took. She fell in love. To hear her tell it, “art found me.” 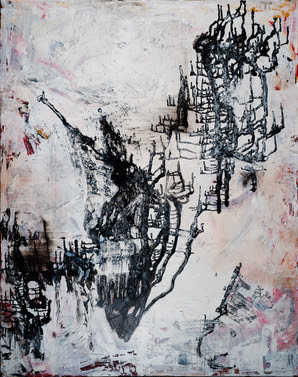 “I would go to the garage and paint every morning for 15 minutes,” she says. “Then I got obsessed. I got so excited I would get up at 4 in the morning and paint. I was just trying to find my own voice.” Waking before the sunrise was not new to Qualls, but, unlike waking to the crow of a rooster on her family farm as a child, she would now wake with a hunger to explore her new found passion.

Qualls delayed taking art classes or reading art books, just trusting her intuition and inner voice to guide her painting and style. This helped shape her artistic philosophy of experimentation: a willingness to play, free from self judgement or self-scrutiny.

When she first started painting it was to get out her head and other people’s heads and to discover an outlet for her voice: a way to express herself that did not involve words.

And what cinched it was an art book on California Expressionists a friend had recommended she read.

Up until this point Qualls' desire for pure self-expression—void of outside influence—had kept her from reading about abstraction. “But when I read that book I cried like a baby, I had found my people.”

Before long, her therapy practice gave way to painting full time, resulting in her opening her studio/gallery in Carmel Valley Village in 2008. She can usually be found working in her studio, experimenting with color, texture, brush strokes and various tools and techniques.

And, just as she wanted to help people as a therapist to access their emotional life, as an artist she wants people to access their creative life. She feels everyone is creative and that all they need is the space for them to express their need to express.

“I love the solitude of being in the studio by myself and love the emotions of the things that go on in people’s lives, quilting together pieces of other peoples’ stories and putting them together on a canvas,” she says. “Each painting tells a story. Life is not without work, there is dark and there is light and hope. My paintings are layers that move toward the light.”

When asked where her inspiration comes from, she said it comes from within and of course is influenced by the world we live... my job is to trust and stay engaged with the process.

“Inspiration lives inside of me, it's just a matter of letting it come out without judgment,” she says. “It comes knocking all the time. I can't do it fast enough, there's not enough time in the day. “I am so grateful that I get to run experiments all day long,” she says. “Where else can you do that? It is magic to watch the power of color and brushstrokes. Every day in my studio is a blessing to me.”

#fineartmagazine
Posted by Fine Art Magazine on February 17, 2017 No comments: