Ayice Aycock, The Parrish Crowd
The opening of Alice Aycock's Drawings, at the Parrish Museums last night was well attended. Alice's exhibition was interspersed with sculptural maquettes depicted with in the drawings. An understanding of Sacred Geometry was explored; possible astrological or mystical influences could be interpreted from this display. Incorporated into the images, as an understanding of Art, Design & Architecture stated as artistic metaphors seen in engineering, reflections into Di Vinci, M.C. Esher, and from my viewpoint the early Russian Avant Garde art.   Additional vast cultural influences may be seen in the works reflective of Thangka paintings, Persian Mosaics, possible engineered space and time warps. Aycock's unusual mechanical perspective was in part noted as foray into computer imagery. The artists expression is labeled as...Aycock is an artist who thinks on paper,” writes Terrie Sultan ... “Her spectacular drawings are equal parts engineering plan and science-fiction imagining. As in all of her work, fantastic narrative writings weave in and out of her images, inspiring her production of sculptural objects, drawings, and installations.”... Sultan Terri, http://parrishart.org/ 4/21/2013 Parrish Art Museum’s Adjunct Curator Jonathan Fineberg, Gutgsell Professor of Art History Emeritus at the University of Illinois, Urbana-Champaign  Urbaan, organized this exhibit. The exhibition's slant or emphasis seems to reflect Urbana's academic environment, as a great Social Science university possibly not fully capturing the intend of the works as displayed. Language as Metaphor, seen to be developed with in a statistical analytic lens possibly seen as the computer or engineering may have influenced this curators understanding, spin, and or story retelling with in the exhibition as dialogue. I felt the display of Alice Aycock's work, Some Stories Are Worth Repeating, shown in an almost static atmosphere not in keeping for what is an outstanding etherial, out of the box, collection of works. Do visit the Parrish on line or in person to enjoy Alice Aycock’s works.

http://www.fineartmagazine.com/
Posted by Fine Art Magazine on April 23, 2013 No comments:

If your around: TODAY 4 - 7 PM AT THE MUSEUM OF RUSSIAN ART 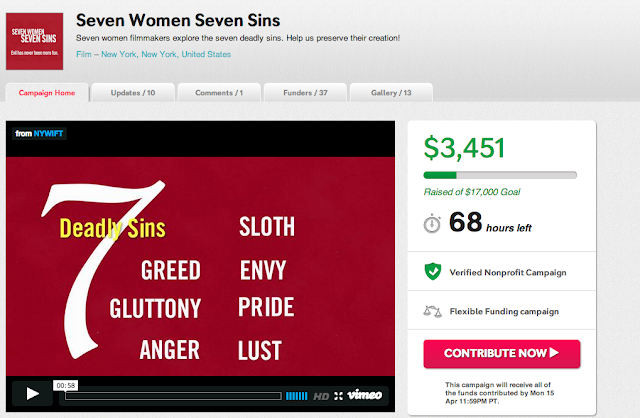 Make a contribution now, and send this to everyone you know. DONATIONS
WILL NOW BE MATCHED!

New York Women in Film & Television?s WFPF contributes to an
understanding of the importance of women in film history. WFPF has
saved over 100 films in the last 15 years.  Do not let this one be lost
forever!

All donations are tax-deductible

Without preservation Seven Women Seven Sins will continue to decay
until it can't be viewed at all! Helping to preserve this film will
allow for access and public viewing through screening prints and DVDs.

Funding Goal
$43,000 is needed to preserve this important work. However, we have
already raised $25,000 in cash and in-kind services. Our goal is to
raise $17,000 through this campaign. 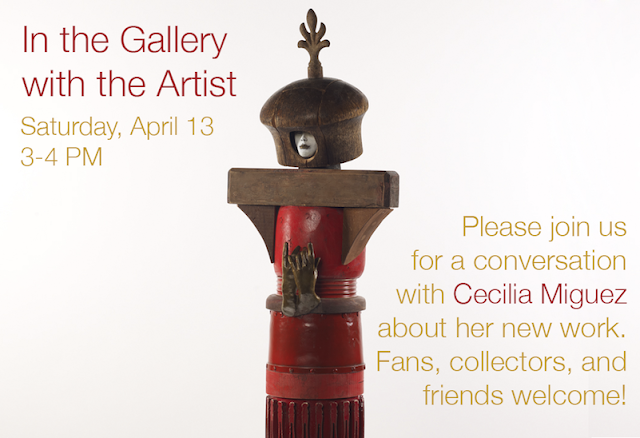 Read and have fun, See all of your Favorite Fine Art Magazines on ISSUU.com/Fineartmagazine

Re see our pricing plans for Fine Art Magazine 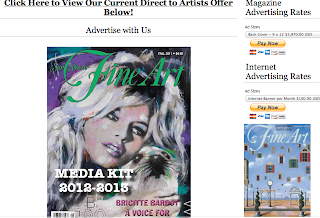 Posted by jamie.jamieforbes@gmail.com on April 08, 2013 No comments:

Kim Dorland Ghosts of You and Me @ the Mike Wiss Gallery

Posted by jamie.jamieforbes@gmail.com on April 08, 2013 No comments: