A note from Peter Tunny “THE ORIGINALS” is located in our new Goldman Global Arts gallery, 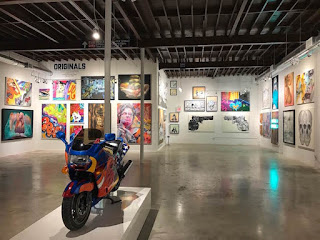 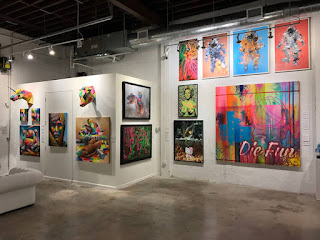 Just a quick note to let everyone know that we have extended “THE ORIGINALS” through the end of April! This exhibition showcases the work of the Wynwood Walls artists past and present. It’s really a must see show encompassing the work of 29 top street artists from 16 countries worldwide.
“THE ORIGINALS” is located in our new Goldman Global Arts gallery, also inside the Wynwood Walls. In addition to this exhibit, we have 14 ASTOUNDING NEW MURALS this year!
Wynwood is pulsing, my studio is rocking, and Miami is on Fire! The weather has been spectacular and we are having a blast down here. Hope you can make it to Miami/Wynwood this season.
With GRATTITUDE,
PT

For the first-time Goldman GlobalArts (GGA) has organized a group exhibition featuring the Artists who have participated in the Wynwood Walls past and present. This exhibition curated by GGA co-founders Jessica Goldman Srebnick and Peter Tunney, presents the work of 29 Artists from 16 countries. This expansive and diverse community of artists all assembled together in one room provides an in depth and unique experience, even for the savviest collector. This show is a labor of love and celebrates our family of artists over the years.
#fineartmagazine 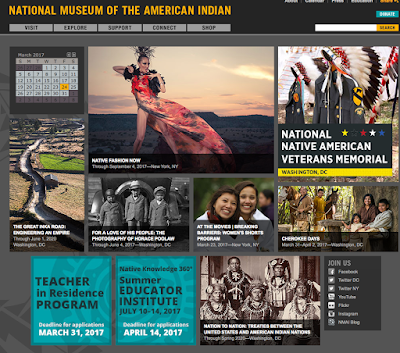 That leaves us just one week to make up the difference.

Join now to help us reach the finish line.

We’re living in a time when what most people know about Indians is incomplete or entirely false.  Even “well known” events in Native American history like the first Thanksgiving and the story of Pocahontas are largely misunderstood.

The Museum exists to fill in the gaps, stand up to longstanding stereotypes, and showcase the contributions Native cultures have made to American history and contemporary life.

But we depend on Member support to make it possible, which is why meeting our Membership Month goal is so important.

Join to help us succeed in gaining 100 new Members before the end of the month.

P.S.  Hurry!  March 31 will be here before you know it. Join now!
#fnartmagazine

Auction on 4 April at 2pm to follow The Odyssey of Collecting:
Photographs from Joy of Giving Something Foundation Evening and Day Sales

NEW YORK – 17 MARCH 2017 – Phillips is pleased to announce highlights from the upcoming Photographs auction, to be held on 4 April at 2pm in New York.  The sale will follow The Odyssey of Collecting: Photographs from Joy of Giving Something Foundation Evening and Day Sales which take place on Monday, 3 April at 6pm, and Tuesday, 4 April at 10am.    Among the highlights of the Photographs auction are important works by Robert Mapplethorpe, Man Ray, Henri Cartier-Bresson, Richard Avedon, Robert Frank, and Richard Misrach, among others. Comprised of 118 lots, the sale is expected to bring in excess of $2.6 million.

Sarah Krueger, Phillips’ Head of Sale, Photographs, New York, said, “Our first various owners Photographs auction of 2017 brings together fresh-to-the-market works that span the 20th and 21st centuries. From an early print of Robert Frank’sRodeo – New York City to a significant work by auction-newcomer Awol Erizku, this sale offers exciting opportunities for collectors of all levels and interests, nicely complimenting the depth of material on offer from The Odyssey of Collecting: Photographs from Joy of Giving Something Foundation Evening and Day Sales. ”

All the best,
Jaime


Can we say tan rested and ready

Naj Wikoff, Vic Forbes, Pete Nelson, and the very artistic Frank Owen in their neck of the woods. Looks like life is easy up north :)


#fineartmagazine
Posted by Fine Art Magazine on March 15, 2017 No comments:

“Long Island Abstraction: 2 Generations” to Exhibit at the Art League of Long Island March 25 through April 15

Muted Swans on Long Island: Environmental issues or not ????

The swan below I photographed on the shoreline of the  Terrell River Park,  Center Moriches yesterday afternoon.

When I got home to edit my photos, I saw plastic was hanging from his beak. It is very difficult for me to understand why people do not take better care of the trash and environment to protect aquatic bird life.
https://sites.google.com/backyardenvironmentalist.com/backyardenvironmentalist/projects
As it turns out there is an issue with the Mute Swan. Some say there has been the extermination of the species as they are non-indigenous and considered to be a threat. A threat to what I am not exactly sure. The phragmites as a grass species that are extremely invasive. They have choked much of the coastal waterways killing indigenous grass species are not native to NY state.

I reviewed the  Mute Swan - NYS Dept. of Environmental Conservation page  2014.
Excerpt: Mute swans are most numerous on Long Island and in the lower Hudson Valley, but they have expanded their range in recent years especially around Lake Ontario. Mute swans can cause a variety of problems, including aggressive behavior towards people, destruction of submerged aquatic vegetation, displacement of native wildlife species, degradation of water quality, and potential hazards to aviation. This plan supports actions by DEC to minimize the impacts of swans, while allowing them to remain in urban parks and other controlled settings. DEC recently adopted regulations listing mute swan as a "prohibited" Invasive Species, which prohibits the sale, importation, transport, or introduction of this species in New York.
http://www.dec.ny.gov/animals/7076.html

Below is from an article on the 27East web page by Kyle Campbell:

In response to public backlash to its proposal last year to eradicate mute swans, the State Department of Environmental Conservation this week rolled out a new policy to deal with the birds on Long Island and elsewhere in the state—one that is less focused on slaughtering them.

While the original plan allowed for the capture or killing of all free-range mute swans, with the goal of eliminating every mute swan in the state by 2025, the new proposal, which was announced Monday, has a more nuanced approach that emphasizes education and regional handling of the issue, and targets the impact of the swans rather than the animals themselves.
http://www.27east.com/news/article.cfm/East-End/99304/DEC-Rolls-Out-New-Plan-For-Dealing-With-Mute-Swans

The creek I live on and walk daily has lost three swans this last month. Hard to say what happened. But of the two mated breeding adult pairs nesting on the creek for several years, only one bird can be is seen today.
Contact us at: 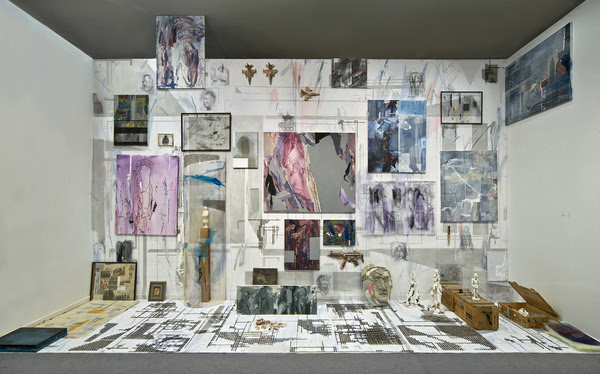 Irfan Önürmen, Diffusion, 2016, Mixed media
C24 Gallery is pleased to present İrfan Önürmen at Volta NY, 2017. In a site specific installation, Önürmen reveals the permeable elements of his work created in different media emphasizing the layering process he uses in his practice. The differing components in this installation are accentuated by the varying subject matter drawing attention to the formal and conceptual associations within the artist’s various periods. Sometimes these relations are beside one another as well as being back-to-back, but always recycling. The sense of disruption reflected from "Diffusion’’ is a reference to the dividing and dissolving psychology of both the artist and the society he’s living in.  The installation opens a discussion of the dialectical relationship concerning the process of artistic productios in all its bifurcations, integrations and diffusions.
İrfan Önürmen’s work reveals the relationships and discrepancies between a personal and a public experience through the lens of contemporary media. Önürmen addresses the impact of mass media on the human experience and its visual representation.
VOLTA NY
GUEST OF HONOR, WEDNESDAY, MARCH 1: 5-7PM
VIP VERNISSAGE, MARCH 1: 7-10PM
PUBLIC HOURS, MARCH 2,3,4: 12-8PM
PUBLIC HOURS, MARCH 5: 12-5PM