NYWIF call for submissions: The Women Calling the Shots showcase of short films made by women filmmakers will take place at the

Learn about some lesser known endangered marine species and what

NOAA Fisheries is doing to aid their recovery. 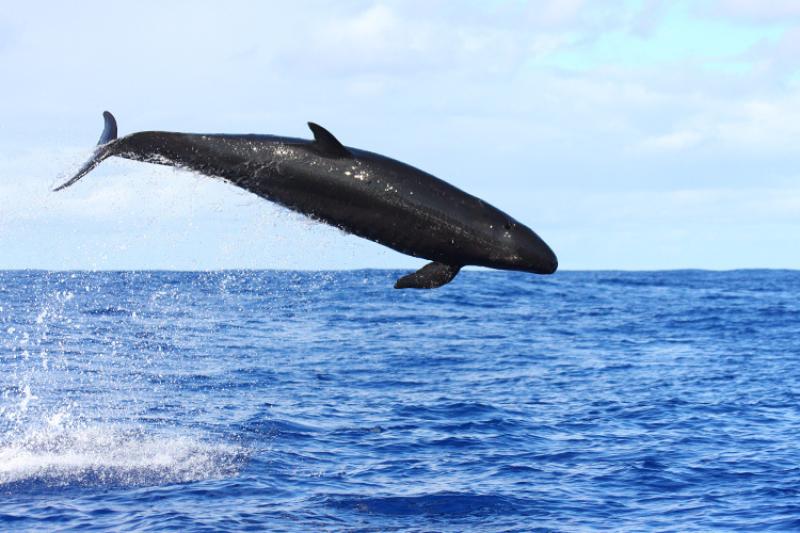 False killer whale jumping out of the water in the Northwestern Hawaiian Islands. Credit: Jim Cotton.

For Endangered Species Day, we want to bring awareness to some endangered marine species that you might not know about. In an ecosystem, each species plays an important role, whether it’s as small as a coral polyp or big as a whale. So when a single species is in danger of extinction, it can affect the entire ecosystem.

When a species is in danger of extinction, it is listed under the Endangered Species Act. The listing helps focus conservation efforts and preserve the diversity of the planet. NOAA Fisheries develops and implements a recovery plan—a roadmap for the species’ recovery—to prevent the extinction. We are committed to the conservation of all endangered species.

Did you know that Atlantic Sturgeon can grow up to 16 feet—the length of the average car? These fish live in both river and ocean habitats along the East Coast.

In the 1800s, Atlantic sturgeon became prized for their eggs, which were valued as high-quality caviar. People flocked to the eastern United States to hunt sturgeon and harvest their valuable eggs. This period, known as the “Black Gold Rush,” contributed to a drastic decline in the Atlantic sturgeon population.

Since Atlantic sturgeon were listed under the Endangered Species Act in 2012, they are no longer threatened by direct harvest fishing. However, unintended bycatch by gillnet and trawl commercial fisheries still poses a major risk to the species. Water pollution, dams, dredging, and vessel strikes also threaten this species.

To help save this migratory fish, NOAA Fisheries works with our partners to protect and restore river habitat, such as by improving fish passage around human-made barriers.

False killer whales are actually dolphins, despite what their name suggests. They are found all around the world in both tropical and subtropical oceans. Known for their sociability, false killer whales share strong social bonds and form groups that hunt and share food together.

Our surveys indicate that the population has decreased dramatically since the late 1980s and we estimate there are fewer than 200 individuals left. Interactions with longline fisheries have contributed to this decline. False killer whales are known to take fish and bait off of fishing lines, which can lead to unintended hooking or entanglement.

One of the world’s smallest sea turtles, the olive ridley gets its name from the olive gray-green color of its heart-shaped shell.

Like all sea turtles, female olive ridley turtles return to land to lay their eggs in the sand. They are remarkable navigators and usually return to a beach in the general area where they hatched. Most olive ridley females come ashore in a mass nesting event known as an arribada, meaning “arrival” in Spanish. Only the ridley sea turtle species (olive and Kemp’s) nest in such mass numbers and synchrony.

Unfortunately, the arribada nesting behavior made it easy for people to take an extraordinary number of eggs and kill large numbers of adult females (for consumption). This was the main cause of the worldwide decline of the olive ridley sea turtle.

Despite their shark-like bodies, smalltooth sawfish are actually rays, and their skeletons are made up entirely of firm but flexible cartilage instead of bone. This species, which looks like a creature straight from the prehistoric era, can be found in the United States off the coast of Florida.

Sawfish use their long spiked snouts to slash through schools of fish, swinging it back and forth to stab and stun prey. Their saw also contains electro-sensitive organs that can sense the weak amount of electricity put out by other animals, allowing sawfish to sense nearby prey.

Young smalltooth sawfish rely on shallow estuarine habitats like red mangroves as nursery areas. However, waterfront development in Florida and other southern states has changed or destroyed much of this habitat. Loss of habitat, along with accidental catch in fishing nets, are major threats to smalltooth sawfish.

To help the recovery of this species, NOAA Fisheries designated areas along the southwestern coast of Florida as critical habitat. Those areas provide important nursery habitat for smalltooth sawfish. We also instituted fishing gear modifications and provided guidelines for fishermen on how to remove sawfish from different types of fishing gear.

Gulf grouper are one of the top predators found in the Gulf of California and eastern Pacific Ocean. These large-bodied fish eat all kinds of prey, using their protruding mouth to swallow fish and crabs whole. Once mature, gulf grouper gather in large groups at underwater reefs to reproduce once every year. It’s likely that gulf grouper mature as females and later transition to males as they age over their 48 year lifespan.

Gulf grouper used to be a common catch for fishermen on the West Coast. But because of overfishing, the fishery crashed to near zero landings by 1970. The U.S. harvest of this species was later banned. Threats to gulf grouper include bycatch, overfishing outside of U.S. waters, and degradation of essential habitats like reefs due to pollutants.

NOAA Fisheries works to conserve important reef, seagrass, and mangrove habitats on which gulf grouper and other endangered species rely.

Of all large whales, bowhead whales are the best adapted to living in icy water. Their layer of blubber, which can be 1.6 feet thick, helps them live in waters that have seasonal ice coverage. The bowhead whale’s thick skull helps them break through 8-inch-thick sea ice. This behavior, along with killer whale encounters, vessel strikes, and fishing gear entanglements, cause bowheads to accumulate scars on their body. NOAA Fisheries scientists use these scars to identify individual whales.

Western Arctic bowhead whales off the north coast of Alaska have shown considerable recovery since the end of commercial whaling for bowheads in the early 1900s. However, there are still many threats to bowhead whales. About 12 percent of bowheads have scars from entanglement in fishing gear, mainly from commercial pot fishing gear. Contaminants like oil spills can harm bowhead’s immune and reproductive systems. Ocean noise, vessel strikes, and predation from killer whales are other factors that threaten the survival of bowhead whales.

NOAA Fisheries helps to manage the subsistence harvest of bowhead whales by Indigenous Arctic peoples, a tradition that has existed for at least 2,000 years. Apart from instituting catch and strike limits for Indigenous communities, we also conduct research to understand the threats to bowhead whales.

You can learn about all of the marine species listed as endangered and the threats they face in our species directory.

More On This Topic

Celebrate Whale Week with Us: A Message from Kim Damon-Randall, Director of NOAA Fisheries Office of Protected Resources