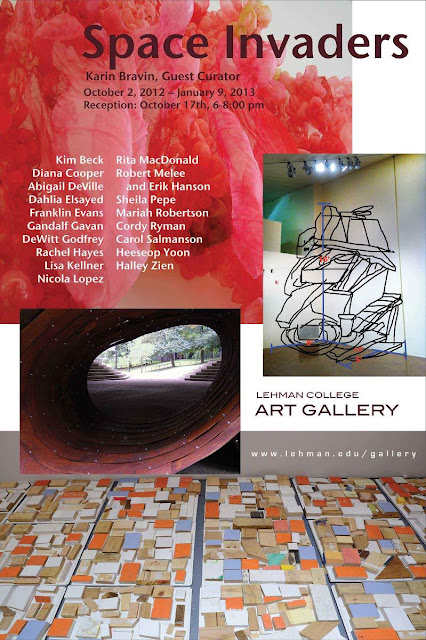 Please join us for the reception of
SPACE INVADERS

Space Invaders, organized by guest curator Karin Bravin, features the work of eighteen artists who make use of the unique spaces at Lehman College - both inside the galleries and outside the building. Using the walls, the ceiling, the floor, or the balcony above the atrium, works appear to grow out of the structure, hang down, wrap around, or peer out from under. Working with a specific location in mind, the space becomes the artist's canvas. The outcome can be organic and free flowing, expressive and thought provoking. These site-specific installations will include floor-bound works arranged in sprawling configurations that appear to be organically inspired. Some of the artists use large sculptures that skillfully appropriate both indoor and outdoor spaces. Others use bits of material that might have once intersected with someone's life creating an expanding cultural collage, and some create installations that cascade from a ceiling or stretch from inside to outside. Each artist will inhabit the space differently, taking cues from the distinctive architecture - Lehman College Art Gallery is located in a building designed by Marcel Breuer in 1960.

Upon approaching the gallery from the center of the campus, the viewer will encounter Rachel Hayes' boldly colored fabric installation. Light and wind affect the piece as it is viewed from both indoors and outdoors. On the Goulden Avenue side of the campus viewers will find Dahila Elsayed's series of text-based flags. These festive, poetic, and suggestive visual markers metaphorically call to attention aspects of the campus with which one might not be familiar. DeWitt Godfrey's monumental steel tubes sit under an overpass, nestled between concrete walls. Kim Beck's work will lead us from the outside to inside with vinyl decals of commonly overlooked weeds that grow out of cracks and up walls.

Inside, in the gallery lobby, Sheila Pepe will dress the atrium with a degree of craft and decoration that likely was never intended for Marcel Breuer's cast concrete; Rita MacDonald's large-scale wall drawing plays up the roundness of the foyer's walls with an image of a pattern caught in a spinning motion. Carol Salmanson's Hercules Lite, made of transparent green plexiglass, will mimic the shape of the building's massive support columns, emphasizing contrasting feelings of weightlessness and ephemerality.

In the galleries, Diana Cooper will combine fragmented photographs with three-dimensional elements, abstracted, but projecting an inherent sense of oppressive systems, networks, circuitry and surveillance. Heeseop Yoon's installation of black masking tape on Mylar will play with positive and negative space, void and solid, transforming the space into a busy network of lines that not only slows down the process of seeing and drawing but also suspends the viewer's gaze. Franklin Evans' work will explode the boundaries of painting with such disparate elements as books, sound recordings, sculpture, painting, artist's materials, digital images, drawing, and process residue. Abigail DeVille will transform the small video room using found and inherited domestic objects that make a connection to her personal universe and the one at large. Cordy Ryman's Rafter Web Scrapwall will be a sprawling 30 foot wall installation of recycled remains from a previous installation of painted wood pieces; Mariah Robertson will create a cascading floor to ceiling installation of unique photographs that are the result of darkroom experimentation.  Lisa Kellner uses the language of diseased cellular activity to make large-scale installations. She hand forms, paints and sews together thousands of organic, bulbous shapes out of silk organza. Nicola Lopez will create an installation using woodblock printed Mylar that will transform a portion of the space's sloping ceiling. Robert Melee's marbleized imitation wood and drop ceiling panels will cover a space that channels and explores the distinct, yet inter-related psychologies of the suburban home. His installation will include the paintings of fellow artist Erik Hanson. Gandalf Gavan's neon and mirrored wall installation will alter the viewer's perception of the exhibition space, and Halley Zien will make use of a hidden gallery kitchen that will be invaded by hundreds of her collaged and psychologically expressive characters.

Gallery Hours: Tuesday to Saturday from 10 am to 4 pm