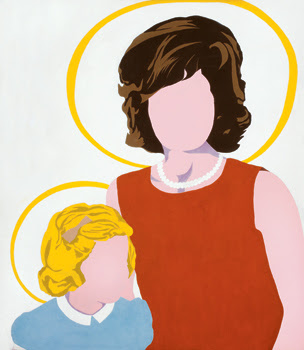 NEW YORK, September 14, 2012—Sinister Pop, the fourth in a series of six exhibitions reassessing the Whitney’s collection, presents a dark and inventive take on the Museum’s rich holdings of Pop art from the movement’s inception in the early 1960s through its aftershocks a decade later. Curated by Donna De Salvo and Scott Rothkopf, the exhibition will appear from November 15, 2012 through March 2013 in the Museum’s second floor Mildred & Herbert Lee Galleries.
Although Pop is typically understood to offer an effervescent view of postwar consumerism, this exhibition provides a more cutting and skeptical take. The show highlights a period of turmoil and upheaval in the United States, where an exploration of new art forms dovetailed with a tumultuous remaking of politics and society through rampant and ecstatic commercialism, transformations in race relations and women’s rights, and the effects of the Vietnam War. In conjunction with this exhibition, a film program titled Dark and Deadpan: Pop in TV and the Movies, curated by Chrissie Iles and Jay Sanders, will be shown in the Kaufman Astoria Studios Film & Video Gallery, also on the Museum’s second floor.

Donna De Salvo, the Whitney’s chief curator and deputy director for programs, comments: "While Pop is often characterized as a celebration of popular imagery, this exhibition focuses on the dark and unsettling ways in which artists looked at the cultural landscape of America in the 1960s and 1970s. By including figures long associated with Pop art alongside those who were not, the exhibition also attempts to bring a more textured and complex reading to a period that was pivotal in the US and internationally."

Whitney curator Scott Rothkopf continues: "As we anticipate our downtown building opening in 2015, we are actively exploring new ways to reconsider both key historical moments and the presentation of our collection. Unlike many exhibitions devoted to the movement, Sinister Pop combines photography, prints, drawing, painting, and sculpture, alongside related films and videos, to express the Whitney's belief in a truly multimedia display."
While many of the artists featured in Sinister Pop are acknowledged masters, including Andy Warhol, Jasper Johns, Roy Lichtenstein, Claes Oldenburg, James Rosenquist, and Ed Ruscha, they are represented by seldom-seen works in surprising new contexts. For example, Ruscha’s photographs of blank apartment facades and filling stations share space with Allan D’Arcangelo’s distorted highway scene and George Segal’s forlorn Bus Station in a group of works exploring the dystopic American landscape. Another thematic cluster examines the complicated depiction of women in the hands of Rosalyn Drexler, Mel Ramos, Tom Wesselmann, and Richard Lindner, while the topic of exaggerated consumption is elaborated through Sturtevant’s monstrous spaghetti, Oldenburg’s pile of giant cigarette ends, and William Eggleston’s photograph of an overstuffed freezer. The roiling political scene and rage of the era are captured in the depictions of US presidents by Judith Bernstein, Jim Dine, and Warhol, as well as in the unrestrained, freewheeling paintings of Peter Saul and Jim Nutt.

The exhibition’s broad scope also includes artists not generally associated with the Pop canon but whose work may be understood within its broader field of reference, such as Vija Celmins, Milton Glaser, Dan Graham, Nancy Grossman, and Christina Ramberg. In particular, the curators have provocatively included a large number of photographs by Eggleston, Louis Faurer, Robert Frank, Lee Friedlander, Peter Hujar, Joel Meyerowitz, Billy Name, and Weegee, among others. Many of these works suggest the ominous and threatening connotations of the word "sinister" in images that evoke crime scenes, foreboding voyeurism, and film-noir tales.
Sinister Pop is the fourth in a multiyear series of six exhibitions reassessing the Whitney’s collection in anticipation of the Museum’s move downtown in 2015. Proceeding in chronological order across a century of American art, the shows offer lively and revisionist takes on signal historical moments. Previous installments were Breaking Ground: The Whitney’s Founding Collection, Real/Surreal, and Signs & Symbols, which is currently on view through October 28. The fifth exhibition in the series will focus on the 1970s and '80s.

In addition to the full-floor Sinister Pop exhibition, the Museum’s film and video gallery will feature Dark and Deadpan: Pop in TV and the Movies, highlighting the central role that television and cinema played in communicating the excitement, anxiety, and desire underlying both Pop and popular culture in the 1960s. From Andy Warhol’s commercial for Schrafft’s restaurants to George Kuchar’s melodrama Hold Me While I’m Naked, this exhibition brings together rarely seen films, television advertisements, and political campaign messages that reflect the extravagant yet deadpan success of Pop art during this period.
The Whitney Museum is located at 945 Madison Avenue at 75th Street, New York City. Museum hours are: Wednesday, Thursday, Saturday, and Sunday from 11 am to 6 pm, Friday from 1 pm to 9 pm, closed Monday and Tuesday. General admission: $18. Full-time students and visitors ages 19–25 and 65 & over: $14. Visitors 18 & under and Whitney members: FREE. Admission to the Kaufman Astoria Studios Film & Video Gallery only: $6. Admission is pay-what-you-wish on Fridays, 6–9 pm. For general information, please call (212) 570-3600 or visit whitney.org.