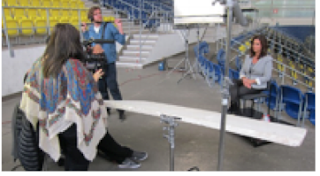 SYNOPSIS | At the height of the Cold War, Katarina Witt became one of East Germany’s most famous athletes. Trained in an ice rink that gave rise to socialist heroes, Witt dominated her field by winning six European skating titles, five world championships and back-to-back Olympic gold medals to become arguably the world’s best figure skater. Known as “the most beautiful face of socialism” her success gave her a unique status in East Germany. It also triggered constant surveillance by the Stasi, East Germany’s notorious secret police force. This film chronicles how Witt, one of the greatest skaters of all time, fought for her future in socialist East Germany, how she faced the great changes that occurred after the fall of The Berlin Wall and, ultimately, how she ended up both a beneficiary and victim of the East German regime.

The remainder of the Nine for IX series on ESPN will air Tuesday nights at 8 p.m. ET as follows: