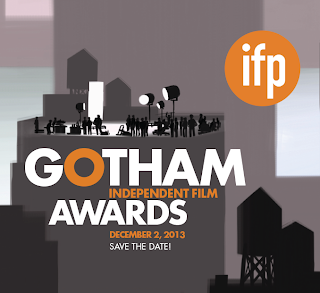 Deadline for Submissions is September 20th, 2013

The first award show of the season, the Gotham Independent Film Awards, established in 1991, celebrate the authentic voices behind and in front of the camera in the year’s best American independent feature films. Submissions are now open for the 2013 awards.

The Gothams provide critical early recognition to worthy independent films and their writers, directors, producers, and actors. Past winners include MOONRISE KINGDOM , BEASTS OF THE SOUTHERN WILD, and HOW TO SURVIVE A PLAGUE (2012);  BEGINNERS, THE TREE OF LIFE, and BETTER THIS WORLD (2011), WINTER’S BONE and THE OATH (2010), THE HURT LOCKER and FOOD, INC. (2009), FROZEN RIVER  and TROUBLE THE WATER (2008), INTO THE WILD and SICKO (2007) and HALF NELSON and IRAQ IN FRAGMENTS (2006), all of which went on to numerous awards and Oscar™ nominations.

Each year IFP chooses a jury of innovators and icons in documentary and feature film directing, producing, cinematography, and acting to bestow the Gotham’s competitive awards. In addition to the new Best Actor and Best Actress awards, the seven competitive awards for 2013 include Best Feature, Best Documentary, Breakthrough Actor, and the Bingham Ray Breakthrough Director Award.  All nominees for these honors are determined by nominating committees of critics and programmers.  Additionally the Gotham Audience Award allows film enthusiasts around the globe to vote online for the winner.

The Breakthrough Director Award, given for the best first feature, has been renamed in honor of Bingham Ray, the late distribution executive.  The award for Ensemble Performance will henceforth be presented on occasion as a special award, and the award for the best film without distribution–Best Film Not Playing at a Theater Near You®–is being discontinued as an award. However, the best undistributed films of the year will continue to be showcased through IFP’s partnership with The Museum of Modern Art to present the ninth annual Best Film Not Playing At a Theatre Near You® screening series in November 2013, at MoMA.
“This has been a rich year for independent films – both those films out now and others on the release horizon,” said Joana Vicente, IFP Executive Director. "It promises to be an exciting season, and as the home of independent film, it is IFP’s goal to celebrate these projects and the artists’ work behind each film, helping to bring them to the attention of wider audiences."

In addition to seven competitive categories, the Gotham Independent Film Awards also recognize those who have made significant contributions to independent filmmaking by selecting individuals to single out in tribute.  Last year the organization feted director David O. Russell, actors Matt Damon and Marion Cotillard, and Participant Media founder and chairman Jeff Skoll. The 2013 Tributes will be announced in the next weeks.

For the third year, IFP will present the euphoria Calvin Klein Spotlight on Women Filmmakers ‘Live the Dream’ grant, a $25,000 cash award for an alumnus of IFP’s Independent Filmmaker Labs. This grant aims to further the careers of emerging female directors by supporting the completion, distribution and audience engagement strategies of their first feature film. The 2012 winner of this grant was Stacie Passon, writer/director of the upcoming RADiUS-TWC release, Concussion. In addition, euphoria Calvin Klein will present the newly created award for Best Actress.

Submissions are now being accepted in six of the competitive categories: Best Feature, Best Documentary, Best Actor, Best Actress, Breakthrough Actor, and the Bingham Ray Breakthrough Director Award.  Applications, along with full criteria, are available at http://gotham.ifp.org.
The deadline for submissions is September 20th.

Nominees will be announced on October 24th, 2013, and winners will be honored at a star-studded ceremony at Cipriani Wall Street on December 2nd.

The Premier Sponsors of the 23rd annual Gotham Independent Film Awards are Royal Bank of Canada (RBC) and The New York Times, and Platinum Sponsor euphoria Calvin Klein. Additionally, the awards will be promoted nationally in an eight-page special advertising section in The New York Times in November 2013.


The Independent Filmmaker Project (IFP) is the nation's oldest and largest not-for-profit advocacy organization for independent filmmakers.  Since its debut at the 1979 New York Film Festival, IFP has supported the production of over 7,000 films and offered resources to more than 20,000 filmmakers, providing an opportunity for many diverse voices to be heard. IFP believes that independent films enrich the universal language of cinema, seeding the global culture with new ideas, kindling awareness, and fostering activism. The organization championed the early work of pioneering independent filmmakers Charles Burnett, Todd Haynes, Mira Nair, Michael Moore, Joel and Ethan Coen, Kevin Smith, and Todd Solondz. IFP continues to play a vital role in launching first films of many of today’s rising stars on the independent scene including Debra Granik (Down to the Bone), Miranda July (Me, You and Everyone We Know), Ryan Fleck & Anna Boden (Half Nelson), Dee Rees (Pariah), and Benh Zeitlin (Beasts of the Southern Wild).