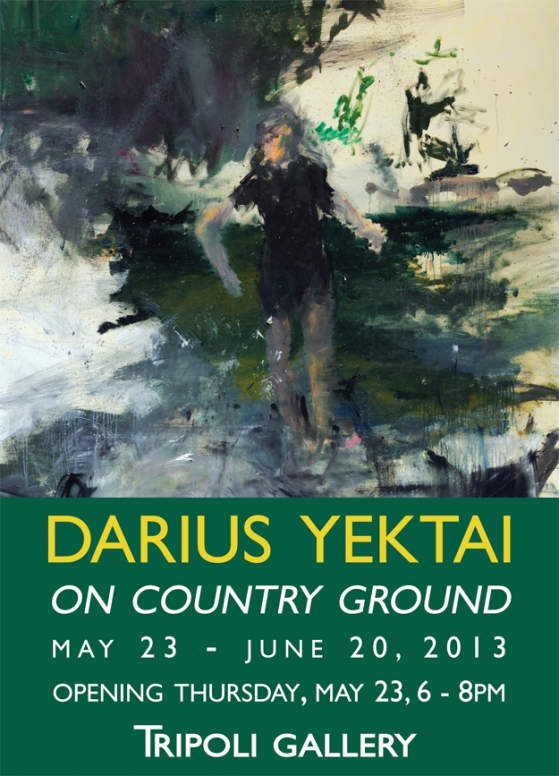 May 23 ‐ June 20, 2013
Download Press Release
Born in Southampton, NY, and having lived out here for the last 12 years Darius Yektai is, as the title implies, simply on country ground.  His studio and love for nature is cradled in our small community but his vision extends beyond our shores.  “It is only here where the beaches run for miles and the sky is unrestricted that I can breathe at ease and focus on the complexities in the painted surface of my work." he has said.  We know from looking at his newest work on view at the gallery that this surface he labors on is of the utmost concern to the artist.
The subjects of his recent work are not necessarily from or of the east end; they vary from the young at swimming holes in the Adirondacks to cliffscapes in Mallorca and St. Barths.  But what they do all share is a sense of landscape as armature for the physical act of his painting.  The figure/ground relationship of his brushstrokes and the figure/ground relationship of his subjects seem to create an interesting plane for contemplation -a metaphysical surface for his didactic painting.
In the painting “From Tree to Sea”, 2012-2013, a bathing suit clad man casually with arms up hangs from a tree branch overlooking a mountainous cove.  The man and tree branch are rendered in watercolor and charcoal on paper.  They have been folded, cut, and pasted in oil paint to the painted image of the cove.  Mr. Yektai is using paint in two distinct and separate ways.  It is being used both as to the service of illusory depth as in the verisimilitude of the distant landscape that falls behind the figure receding into space, and paint as to the service of adhesion, a quality that speaks about the nature of the material and that floats on the surface of the canvas.  It is in this way that Mr. Yektai’s work is activated.  He is constantly shifting his approach to the painting, and the paint is constantly negotiating itself as truth in material and to the illusion of representation.
Darius Yektai studied at Occidental College in Los Angeles, and the American University in Paris where he completed his BA in art history.  Over the years, his work has been recognized with various awards including, Best Representational Work (2010), Best Sculpture (2008), and Best In Show (2002), from Guild Hall’s annual members show. This will be his second solo exhibition at the Tripoli Gallery.