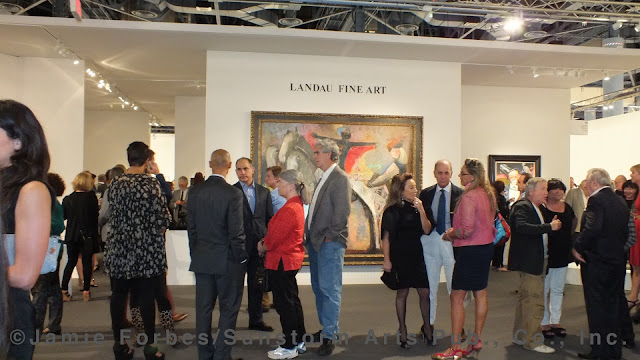 Art Basel. Opening night was a frenzy of glamor, excitement & ...the rich flavor of Art buyers and sellers coming together to see and be seen at one of the premiere social art events of the year. This years Art Basel started with a strong attendance and sales.

Miami was turned into a sea of people going to and from the 50 some odd art shows spun out for the the original Art Miami  in 1992. Dealers, buyers, collectors, artists , journalists, and citizenry, taking in the heat generated for the moment.  Jamie Forbes Fine Art Magazine

Miami Beach, Florida, USA – The 2012 edition of Art Basel in Miami Beach officially closed, Sunday, December 9. Praised by critics, exhibitors and visitors as Art Basel’s most serious presentation in Miami Beach to date, its galleries across the board reported consistent sales throughout the week.

The show, whose main sponsor is UBS, again attracted 50,000 visitors, generating an attendance of 70,000 over the five show days. Art Basel in Miami Beach was visited by over 130 museum and institution groups from across the world. Renowned private collectors from the Americas, Europe and emerging markets returned, and were joined by new collectors from around the globe.

As Art Basel marked its second decade in Miami Beach, more than 250 leading galleries from  31 countries from North America, Latin America, Europe and Asia presented the highest quality of work at the show, underlining its seriousness. Given a particularly strong representation of Modern material at the show, as well as the entry of a dynamic selection of younger galleries – including nine that were newly accepted to the fair from NADA– visitors explored 11 decades and over 110 years of art history within the Miami Beach Convention Center. Additionally, collaborations with local and international partners ensured a diverse and deep program of art events, from Art Basel Conversations and Art Salon to Art Public,  Art Video and Art Film, making this edition a celebration of the artists and their galleries.

Stefania Bortolami, Bortolami Gallery, New York
'After the destruction that the gallery experienced from Hurricane Sandy it is significant that we
were able to show at Art Basel Miami Beach. All of our efforts were rewarded by meaningful
sales at the fair and wonderful exposure for our younger artists.'

Alia Fattouh, Lombard Freid Gallery, New York
'I would say that the fair comes at a crucial time for many New York galleries that have been hit
by the hurricane and the flexibility that Art Basel showed in these exceptional circumstances has
been particularly appreciated and helpful.'

Silke Thomas, Galerie Thomas, Munich
'Art Basel Miami Beach 2012 has again been a great fair. There were interesting new collectors
and sales. We really enjoyed being part of the show.'

Sean Kelly, Sean Kelly Gallery, New York
'The preview of Art Basel Miami Beach was the best first day the gallery has ever had at any art
fair...ever. We literally had nothing left but to sell off the iPads. We sold an Antony Gormley for
300,000 GBP, a Los Carpinteros for 110,000 Euros, and every Terence Koh we brought. We
also met new collectors and viewers genuinely interested in our artists. An astonishing fair!'

Adam Sheffer, Cheim & Read, New York
'We were delighted again this year by the results at Art Basel Miami Beach. It remains the gold
standard of the international art fair circuit.'

Marc Payot, Hauser & Wirth, Zurich, London and New York
'At a moment when art fairs are almost too numerous to count, Art Basel Miami Beach stands out
in attracting an extraordinary number of museum curators and directors from across the entire
United States and around the world. With that in mind, we presented an exhibition-like stand that
brought clarity and very high impact to new works by just two artists - Roni Horn and Guillermo
Kuitca. We are now engaged in talks about several important institutional projects for both artists.
So for Hauser & Wirth, this year's fair was a major success not only in commercial terms, but
also in the opportunity to connect our artists' with museums internationally.'

Steven P. Henry, Paula Cooper Gallery, New York
'We approached the show in a very serious way this year, with a strong curatorial view. We
noticed that there was a lot of thought that went into the presentations around us as well. The
general statue of the Miami Beach edition has really risen to a level comparable to Basel.'

Hella Pohl, Galerie Thaddaeus Ropac, Salzburg, Paris
'There was a very strong demand for works by Georg Baselitz and Robert Longo. Our first sale, a
work by Jason Martin,happened only a few minutes after the fair opened.'
Elyse Goldberg, James Cohan Gallery, New York
'This year's Art Basel Miami Beach was a truly wonderful fair. We were successful in placing
many works in collections both public and private, as well as meeting collectors, curators, and
writers new to our gallery'

Thomas Dane, Thomas Dane Gallery, London
'We have had good fair in Miami. We had success in selling works by Arturo Herrera, Glenn
Ligon and Alexandre da Cunha. Miami has always been an important fair for us and this year
was no exception.'

Maho Kubota, SCAI The Bathhouse, Tokyo
'This is the only American fair where we show. We had a clear strategy to present only Japanese
artists from multiple generations and through this we were able to share the diversity of
Japanese art with a large number of viewers and have connected with many new and diverse
collectors in return. The show's high quality allows exhibitors to showcase works as they deserve
to be seen.'

Pedro Mendes, Mendes Wood, São Paulo
'Miami for us is a junction between the North and the South. It's almost a port where everyone
gathers. At the show in Miami, we've connected with collectors and curators from so many
different countries and throughout the region that in a sense Art Basel Miami Beach becomes a
window for Latin American thought, its art dialogue and practice.'

Paul Kasmin, Paul Kasmin Gallery, New York
'This year the fair drew primarily new international clients for us and it was a great success for
many of our artists. It was a particularly remarkable year for Iván Navarro, with the fair's curated
programs for Art Kabinett and Art Public.'

Flávio Cohn, DAN galleria, São Paulo
'We are very pleased with our participation at the show and have had very positive responses to
our presentations. We achieved good results, even better than we had hoped for. The interest in
the Latin American and Brazilian artists we represent has definitely grown over the past two
years.'

Jorge Mara, La Galería Jorge Mara La Ruche, Buenos Aires
'This is our third time at Art Basel in Miami Beach - and it has been the best fair for us. Over the
past two years visitors to the fair have come to see and buy, and now they are coming back
again. We bring artists to the show not many people outside of Argentina or Latin America know
and we provide the intellectual background to get to know these artists.'

Aurelia Bourquard, Press & Communication, Art: Concept, Paris
'The fair went well, the sales were good and we met extremely interesting collectors from Europe
as well as the Americas.'

For the second year running, Art Public, produced in collaboration with the Bass Museum of Art,
turned Collins Park into an outdoor exhibition space with large-scale sculpture, video, installation
and live performances. For this year's edition, the sector’s curator Christine Y. Kim, Associate
Curator of Contemporary Art (LACMA) and Co-founder, Los Angeles Nomadic Division (LAND)
brought even more complex works to Miami Beach and extended the exhibition space into the
sky, across which Dave McKenzie’s airplane carrying a banner offering different marriage
proposals every day. A highlight of the week, Art Public Opening Night on December 6 was free
and open to the public, offering a program of performances by Jason and Alicia Hall Moran with
Brandon Ross, My Barbarian and Alex Israel. For more information please visit
artbasel.com/public.

Steering debate and discussions not only on the state of the art market but the arts in general,
Art Basel's daily program of talks offered its patrons and the general public another platform to
engage with art in a meaningful way. Many leading artworld figures took part in the morning
Art Basel Conversations. The Premiere Artist Talk featured legendary artist Richard Tuttle in
conversation with Chris Dercon, Director Tate Modern, London. Further topics included the
'Public/Private' panel discussing 'The Encyclopedic Museum' on the Friday of the show.
Saturday’s panel focused on 'Why Japanese Post-War Art Matters Now'. On Sunday the 'Artistic
Practice' series presented 'The Artist as Musician'. Art Basel Conversations is presented by
Absolut Art Bureau, responsible for The Absolut Company’s international art initiatives.

Art Salon, which includes shorter presentations each afternoon, featured 20 talks, ranging in
topics from the Latin American art market to 'New Perspectives from the Edge of Arabia'.
Taken together, both talks programs represent an essential aspect of Art Basel’s concept,
reflecting the idea that the show is not only a marketplace for artworks, but also a meeting
place for all of the artworld’s key players. 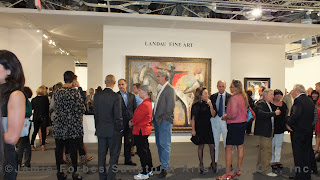 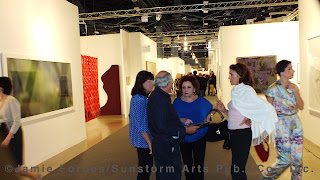 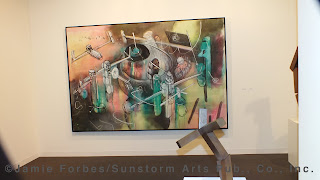 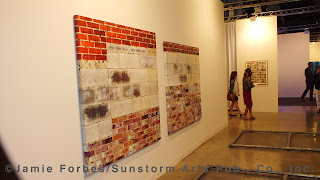 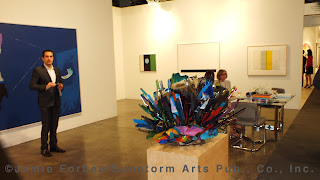 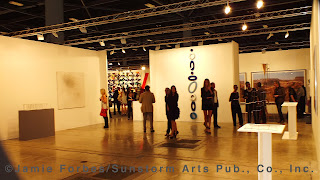 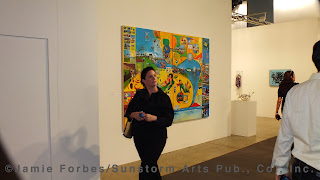 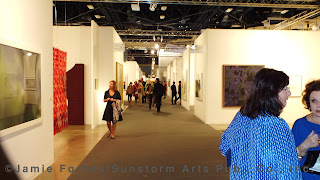 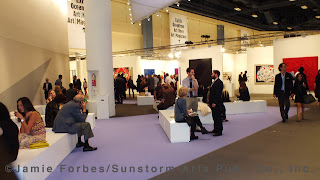 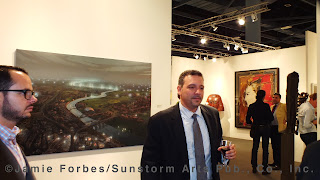 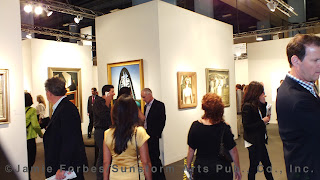 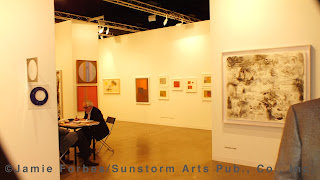 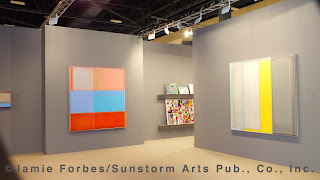 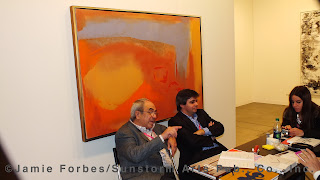 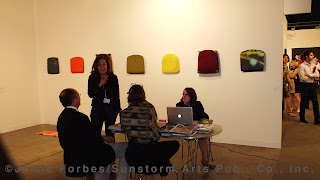 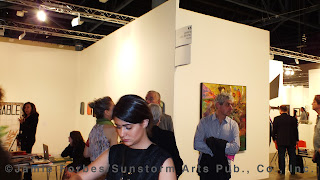 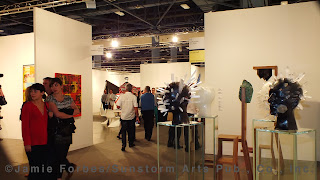 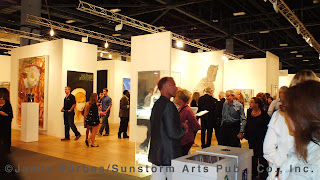 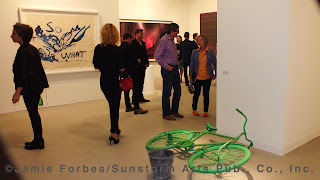 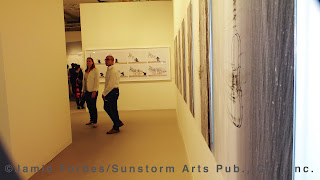 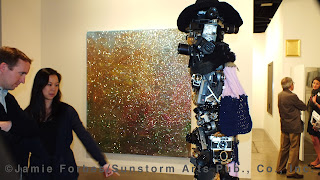 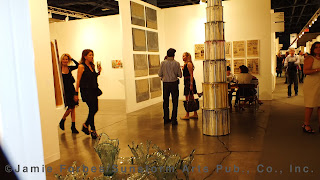 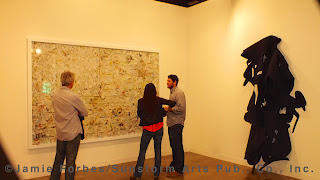 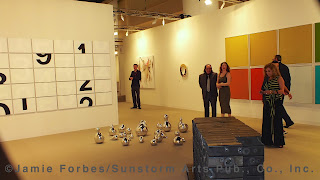 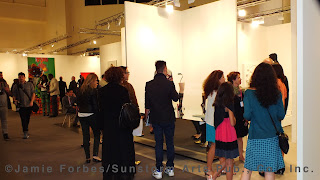 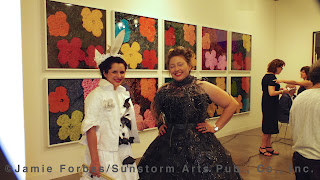 Posted by jamie.jamieforbes@gmail.com on December 12, 2012