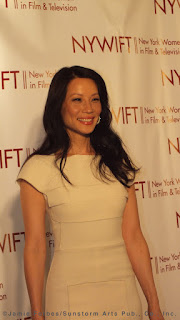 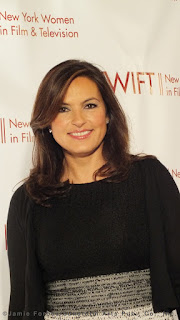 NEW YORK, NY–New York Women in Film & Television (NYWIFT), which has supported the advancement of women in the entertainment industry for 35 years, held  the 32nd annual Muse Awards at a gala luncheon to be held December 13th

The 2012 NYWIFT Muse honorees include some of the most talented women in the entertainment industry:
·         Mariska Hargitay, an Emmy and Golden Globe award-winner and star of Wolf Films/Universal Television’s Law & Order: Special Victims Unit, now in its fourteenth season. She founded the Joyful Heart Foundation, whose mission is to heal, educate and empower survivors of sexual assault, domestic violence and child abuse.
·         Lucy Liu, a Screen Actors Guild and Emmy-nominated star of CBS’ Elementary—a contemporary take on Sherlock Holmes. She stars as “Dr. Joan Watson,” the first ever female Watson. On film, Liu is known for roles in The Man with the Iron Fists, Detachment, Kill Bill, Charlie’s Angels and Chicago, among many others. Since 2004, Liu has served as a UNICEF ambassador.
·         Lisa F. Jackson, an Emmy and Sundance Jury Prize award-winning documentary filmmaker. Jackson has been making films for more than 30 years. Sex Crimes Unit, her most recent film, is a portrait of prosecutors in the Manhattan District Attorney’s Office as they work to bring justice to victims of sexual violence. It was broadcast on HBO.
·         Kim Martin, President & General Manager, WE tv. Martin oversees all aspects of WE tv, including marketing, programming, production, scheduling, digital media and new business opportunities. Under her leadership, WE tv has significantly expanded its original programming slate to include the hit series Braxton Family Values, Joan & Melissa: Joan Knows Best?, Mary Mary and My Fair Wedding with David Tutera, among many others.

NYWIFT will also bestow the seventh annual Loreen Arbus Award to Women Make Movies and their Executive Director Debra Zimmerman, who has led the organization since 1983.

About New York Women in Film & Television
The preeminent entertainment industry association for women in New York City, NYWIFT supports women calling the shots in film, television and digital media. NYWIFT energizes the careers of women in entertainment by illuminating their achievements, providing training and professional development activities, and advocating for equity. Membership includes more than 2,000 women and men working in all areas of the industry. NYWIFT is part of a network of 40 women in film organizations worldwide, representing more than 10,000 members. For further information about New York Women in Film & Television, please visit nywift.org.

Posted by jamie.jamieforbes@gmail.com on December 19, 2012