Earth and Water: An Exhibition of Ceramic Arts and Watermedia 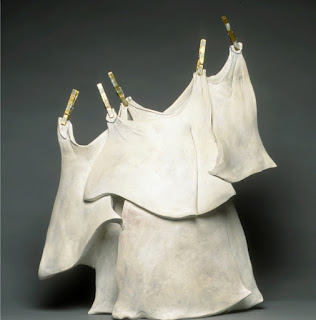 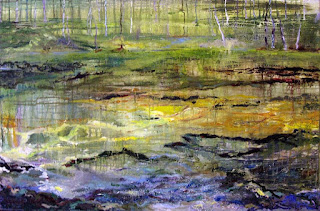 l to r:  “Dirty Laundry Series 1 of 3: Pope’s Laundry”, clay with wood, gold leaf, and collage by Barbara Karyo;
“As Far as the Eye Can See”, acrylic by Susan Bird

In this visually exciting exhibition the Art League of Long Island is presenting the work of eight contemporary Long Island artists who create in either clay or water-mediums.  This exhibit presents an opportunity to compare the individual approaches to subject matter and material, and discover new connections and contrasts.

The ceramic artists include John (Jack) Fink who's whimsical work will include an operating fountain, stimulating both sight and sound; Tina Folks will exhibit her "Katchina" figures and "Tablets", a wall installation which makes reference to the spiritual past; Barbara Karyo, who's bas-relief forms and sculptures convey gesture and movement; and William Shillalies, who will be exhibiting his ash glazes on conceptual pieces, inspired by the natural world and exploring the distinction between movement and fragmentation.

The watermedia artists are Susan Bird, who in her interpretations of nature uses acrylic paint in drips and washes; Riccarda de Eccher, a watercolorist who paints dramatic vistas of the Italian Alps in a soft limited pallet; Katherine Hiscox who will exhibit her plein air works that capture the rhythms in nature; and Deborah Katz who's abstract watercolors express the essence of a moment in nature.

A brief bio of each artist follows:

Susan Bird studied with Steve Lamposana at the Nassau County Museum of Art and currently studies with Stan Brodsky at the Art League of Long Island. A teacher for many years, she now paints full-time at her studio in Huntington.

Riccarda de Eccher grew up in northern Italy at the foot of the Dolomites.  An avid mountain climber, Ms. de Eccher began painting later in life, working in watercolor with the mountains as her primary subject.  Her work has been published in several books in collaboration with Italian authors and has been shown widely in Italy and, in this country, at the Heckscher Museum.

John (Jack) Fink graduated with a BFA from Millikin University in Illinois and did post-graduate work at Ohio University, Illinois State University, and Pratt Institute.  He was awarded an MA from NYU.  Mr. Fink was one of the founding members of the Art Department at Nassau Community College, where he continues to teach ceramics.  An award-winning artist, Mr. Fink's ceramic sculptures reflect his effort to draw on the mystery of the creative process.

Tina Folks holds a BA in Studio Art from Marymount College in Tarrytown, NY and a BFA in Ceramic Design from Parsons School of Design in NYC.  She has served on the Board of Directors for the East End Arts & Humanities Council in Riverhead for 3 years and was recently named Board secretary.

Katherine Hiscox received her MA in Creative Art Therapy from Hofstra University and a BA and MS in art education from Queens College.  She is currently teaching watercolor workshops. Her work, which has won numerous awards, graces many private collections.

Barbara Grossman Karyo began her art education studying fashion design at Pratt Institute.  Her initial exposure to pattern-making has had a significant influence on the development of three-dimensional forms which she applies to her clay works.  Ms. Karyo was awarded an MFA in painting and ceramics from Pratt Institute and is currently Professor of Art, (Drawing and Ceramics) at SUNY's Suffolk Community College, where she served as Director of the Flecker Memorial Gallery from 1980-2002.

The Jeanie Tengelsen Gallery is located at 107 East Deer Park Road in Dix Hills.  Gallery hours are from 9am – 4pm Monday through Friday, and 11am – 4pm weekends.  Admission to the gallery and the reception is free and open to the public.  For more information about the exhibit visit www.artleagueli.org or call (631) 462-5400.
Posted by jamie.jamieforbes@gmail.com on December 21, 2012