On Thursday, July 21st, there will be a group of artists with individual exhibitions for the Main Galleries, Sculpture Garden and Carriage House. The work will be on display through August 14th with a reception for the artists on Saturday, July 23rd from 6:00 until 8:00 p.m.

"I count myself lucky to have friends who share a sweeping view of the Hudson River as seen from Mt. Merino, just above the town of Hudson. One has only to look out the window to see an iconic and immediately recognizable landscape. Maybe I'm turning into a lazy plein air painter, but there's nothing finer than waking up to this particular scene of shifting light as it plays over mountains and water. I like to start drawing at dawn, often right from my room.

Works on paper included in this show provided much of the inspiration for the paintings, which were made later on in the studio. What appears to be casual brushwork is often very deliberately based on forms and gestures worked out earlier in drawings. The large diptych, Midday Mt. Merino was based on two sets of drawings made at the end of last summer. While I rely on photos for some kinds of information, they can never take the place of drawing on site.

Some of the smaller paintings recall drawings made last summer in the Berkshires. I've recently jettisoned the dark or colored grounds that I've used for years. This feeling may not last, but at the moment, working over white feels loaded with promise and fresh meaning."

The exhibition of sculpture by Bruce Gagnier will be extended for a second month in the sculpture garden, in conjunction with Lori Bookstein Fine Art.

Bruce Gagnier was born in Williamstown, Massachusetts in 1941. He studied art history at Williams College (1959-1963) and went on to attend the Skowhegan School of Painting and Sculpture in the summer of 1963 and Columbia University (1963-1967), where he studied under Nicholas Carone, Peter Agostini and John Heliker.

"I model figures in clay. These five words isolate elements of my work: myself, the figure, the modeling of it, the clay. Modeling is historical, consistent in technique, painterly, and opposed in its purest practice to carving. Clay can be molded to another identity, made into an illusion through light. The figure has a history of being a form of content, a container for a subject. Sometimes, for me, it seems that its strictly carnal self has taken over and that its body has become the meaning. This difference can become a fulcrum between the then and now. Most often, in my work, I look to the figure as a possible container which embodies a search for a somebody, a person who as another self represents something about all of us; of the human in the environment affected by experience, a record of desire and disappointment, the longing for an ideal and the recognition of compromise. The contents merge to the surface, rearranging the anatomy. I participate in this by trial and error. But these bodies are not me, they are other people and because of that, they are more interesting. The work begins in clay, on a wire armature; I begin close to the wire, the interior. I intervene, gauging the person of the figure along the way. I put myself in the work from the inside out. I go back though, cutting in, to inspect and renew the inner life. One also shifts forms, previously defined, in a collage-like way, to rearrange the combinations and thereby adjust the personality of the (now) other person. It becomes very much a spatial game at this point. Marks, elements of work, etc, are left over, not intended as such and remain only as part of the imperfection at helping a subject find itself in the person; of arriving at a smooth and seamless arrangement to outer space. I give them a name. The inner life and history of this being in reality never completes itself but the work ends when an agreement is made between us that experience for the time being has run its course." 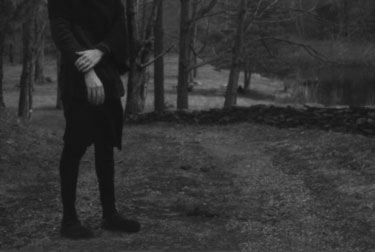 "I started weaving paper blankets, making drawings of handkerchiefs and photographing plates and chairs as a way of calling attention to the beauty and importance of everyday objects and situations that often go unnoticed. It started when I bought a handmade piece of lace at an antique shop in the country for 50 cents. Later when I tried to find someone who knew how to make such lace I could find no one. We place so little value on hand work. This somehow got me thinking of war and I felt there was some connection between not valuing handwork and killing. Then I began to think about the wounds of soldiers and the art of bandaging. That seemed like another value of cloth and handwork and I started making drawings of bandaged soldiers after photos I found in the newspaper. Since traditionally bandaging was done by nurses who were mostly female, and lace was also woman's work the work I was making became about a woman's way of holding things together through stitching. The work is modest.

There is a saying in India that happiness is in the smallest part of a grain. In that way it makes me happy to offer something small." 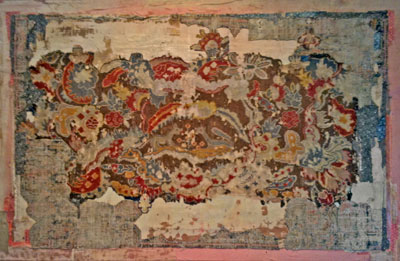 The poetic language of color and texture, and the altering effects of light and age are things that I am always seeking to capture and communicate in my work. There is something within ourselves that we recognize in surfaces that are distressed, peeling, rotting, unraveling, and fading. These surfaces speak to our mortality on the one hand and on the other, to the love we have for the marks we leave on this material world, even if they, too, are ultimately destined to disappear.

As a new mother observing my young son learn about the organized world one object, word, and number at a time, the visual universe is once again suddenly simplified into smaller parts. In much the same way, I have found myself seeking, more and more, the lowest common denominators and kernels of beauty in the world of second hand and discarded things.

In the studio, I have settled into a rhythm of 'framing' the poetry of those found and salvaged textures and colors in the simplest means. And it feels good to leave it at that. And the next day I find myself giving in to this very human compulsion to re-complicate things - by assigning and assembling fragments into a new visual purpose. And this tug of war persists, seeming to permeate all aspects of my life. 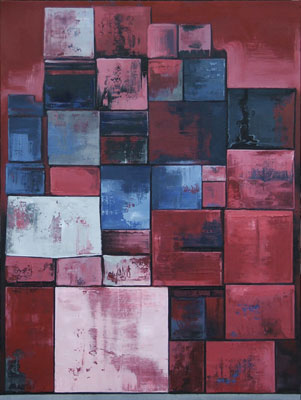 "A great teacher of mine once said paint can be anything, a sentiment I very much agree with. I might add that paint can be everything - at once.

Through the use of basic geometric shapes - squares, rectangles and trapezoids - I make paintings that simultaneously reference a number of visual notions and phenomena. Architectural forms derive from rectangularly shaped painting media and are a response to the urban landscape in which I live. Color combinations reference the elements - water, earth, sky, and fire - while also referring to digital light, the vibrant blue of a computer desktop, and childhood memories of Boston's brick cobbled streets and buildings. Figurative content speaks to the experience of confronting somebody within the confines of a rectangle, be it a doorway or a mirror. Pressurized junctions of form, and subsequent deformations of shape, are a nod to aerial photography and environmental forces acting on one another.

Laden with contradictory source material, the geometric units that reverberate throughout the work are at once flat and volumetric, solid and ephemeral, synthetic and organic, static and kinetic, fictitious and real; they are structures seen from above and from the ground; they are free-standing and verge on collapse; they speak of pink flesh, metal shards and glowing television screens; they are somebody who is nobody, someplace that is no place.

The duality of the paintings, their refusal to fit into a single reading, their very instability is what makes them more than the sum of their parts - it gives them vitality and a spark of life." 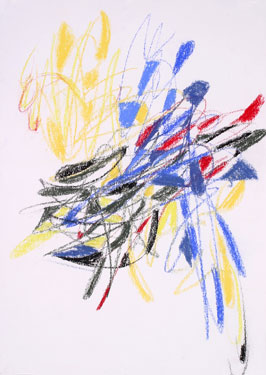 "This body of work began as an attempt to make an image of a single galaxy. As I drew this image and looked at the results, it became evident that one system of lines was often overlapping others. Soon I was imagining and drawing galaxies within galaxies; a metaphor I find significant for the complexities of contemporary life.

My approach is more automatic and spontaneous than in previous times. I use pastels because of their immediacy that allows for a wider range of intuitive acts and fluid combinations of forms and colors. It yields (for me something I've been seeking in my work) a gestural approach to geometric abstraction.

My new paintings and drawings continue to reflect an interest in the dynamic of movement that underlies everything that surrounds us. I've long been intrigued by the thought of differing shapes and speed and of time. I'm in awe of the knowledge of the simultaneity of such facts as the movement of tectonic plates beneath the surface of the earth, the molecules that move within apparently inert matter such as granite and of course, the infinite possibilities of space, of what is beyond our planet.

Departing from the exclusive use of rectilinear configurations, in the new work, line is free to meander, loop, entwine and tangle to express abstract states that hang in the balance between looking like something and representing a feeling, and more precisely a state of mind. This body of works concerns itself less with forms culled from history, places travelled, invented or remembered landscapes, but rather the work now is more close to reflecting inner panorama.

Slashes, cluster, snarls of line suggest worlds within worlds and contradictory states of being. Shapes suggest graffiti, forests, flowers and galaxies in which both the macroscopic and the microscopic are simultaneously evoked by the work."

Gallery hours are Thursday through Monday, 11:00 till 5:00 p.m. For further information about the gallery, the artists and upcoming exhibition, visit