Art Fair march 3-6 NYC, Hope to see all of you there - Fine Art Magazine 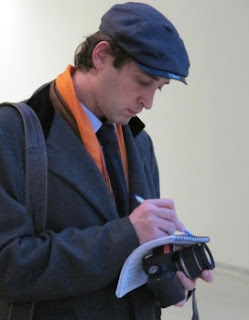 Art Fair march 3-6 NYC, Hope to see all of you there - Fine Art Magazine: http://www.hydrartproject.com/ Clio Art Fair is Returning Under the New York City Sky Interview with Alessandro Berni, founder and director of the project Alessandro, Why Clio? Clio is the muse of history. When Clio sings your name while playing her harp, this means that your name has been admitted to the mental olympus of human history. I’ve always been fascinated by this mythologic and inspiring figure. When I conceptualized this idea, I was alone. I suddenly understood that I should create a great team to successfully carry out my vision. Because of that, the first person that I invited to join me was Clio. What are the challenges that you anticipate? We are a new event in a town saturated with events. It’s hard to surprise Manhattan. I would like to underline that this show is not born to host emergent artists. Our show is composed of solid and professional artists. Some of them have their studio and they are not looking for a gallery; others would like to be represented. Basically all of them use this event to make new connections in terms of art critics, collectors, curators, and gallerists. What are the distinguishing traits of your fair, or rather your anti-fair? We emphasize the concept of anti-fair because galleries are not admitted to show the artists that they represent. This event is created for independent artists. Furthermore there are no booths. We highly respect the architecture of the space that hosts our Fair. The result is a curated international group show. How does the selection process work? During the year, we make a call inviting independent artists to send us their masterpieces. Starting from the best works that we receive, we make our selection. All the works shown have been previously analyzed to be admitted by our curatorial team. We discuss everything with the artist. From the dimensions to the supporting materials that will be used. Where are the artists from? US excluded, the more represented countries are Italy and Israel. Basically we have artists from every part of the world including Korea, Argentina, Iran,and also New Zealand. It’s a real international show. What does “international” mean for you in a global context? If you live in the highly technological side of the world, everyone uses the same branch of computer, phone, the same web-sites. But we don’t have the same passport, and in particular the same history. International could be a superfluous word for artists that don’t include their past in their works or the the artists that make art with an impact of technology. I was born in Tuscany (Italy ndr). I’ve lived in Kenya, Ireland, and France. Now I’m the US. I work in English, French, and Italian, and eat sushi everyday. International is the place where I live. Talking with you I’m realizing that this word will become superfluous in the future. Let’s defer to the muse Clio to tell us when it’s time to stop to using it. Why have you chosen New York, are you planning to organize Clio Art Fairs in the future? When it comes to business and energy, there is nothing comparable to New York. The contemporary art world is a circus that each year likes to travel all around the planet. Chelsea was the right place to start our adventure. We were born as a nomadic project. We don’t exclude the notion of us being present in other towns in the future. Clio art fair 2015 hosts 50 artists plus I’ve heard there will be 5 handwritten documents signed by Napoleon Bonaparte. Why this choice to select these historical documents in a context of contemporary art fair? Napoleon is a fascinating figure with lovers and detractors. His life, his success and defeats are studied by all the world. He’s still an example for some, an evil person for others. Despite the personal opinion that everyone could have about him, all the world must recognize that he’s a man that, because of his actions, left his century as an immortal. I personally own these documents. His presence is a wish for all the artists included this year. A wish of glory and success, and why not, that one day, Clio will play her harp for some of them.
Posted by Fine Art Magazine on February 10, 2016