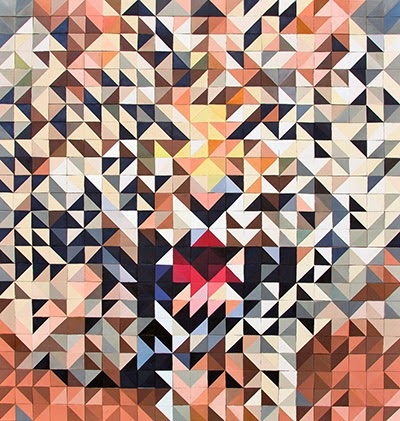 Galerie Protégé is pleased to present Hunt For Inspiration, a solo exhibition by one of contemporary arts most innovative visual artists – Jamie Martinez. The show will present three sets of work from different series which illustrate the Triangulism method and the visual thread of constantly hunting for inspiration.

Triangulism for Martinez has been his view and philosophy that he has trademarked as the absolute practice of creating forms by utilizing the most mystical, symbolic and iconic of all shapes. His rapt fascination that all matter can be cut up and constructed by this shape has been the driving force involved in creating his art.

The Abstract series features the triangle as an amalgamated form that begins as the building block. The works on fabric take on a whole new dimension, as the triangle not only becomes the basis of a composition but a textured component as well. Finally, the menagerie and imagery that has garnered the most attention as the triangle rendered in oil has strategically become a conduit of what is not real in plain sight but through the use of electronic devices such as the camera on cell phones will translate the pixel image into absolute reality in the digital realm. This is where Martinez cracks the idiom and convention of visual art showing its future direction has a solid compass. All through these various works, one can feel the relentless pursuit of hunting for the inspiration that will ultimately end in the kill for abject realization.

Jamie Martinez currently works and resides in New York City. A native of Cali, Colombia, he immigrated to the U.S.A. to Florida at the age of twelve. Attending and earning his Bachelor’s Degree in Visual Arts at Miami International University of Art and Design, he moved to New York City to continue his art education at the Fashion Institute of Technology.  He has worked in both fashion and design which infuses all his oeuvre with a distinct style. He is the founder and publisher of the popular art on-line publication, ARTE FUSE. His work has been included in private collections and featured in Nolita Heats, Escape into Life, New York Optimist, Blouin ART INFO, and he has collaborated with the fashion brand Diesel for an installation in Union Square Park.  His work has been shown in Russia, Paris, Spain, Canada, Miami and numerous galleries in New York City.