20th Century & Contemporary Art Evening Sale on 18 May to Feature Blue-Chip Masters, Such as Basquiat, Picasso, Frankenthaler, and Rothko, Alongside Works by Wong, Berrío, and Weyant!

20th Century & Contemporary Art Evening Sale  on 18 May to Feature Blue-Chip Masters, Such as Basquiat, Picasso, Frankenthaler, and Rothko, Alongside Works by Wong, Berrío, and Weyant. 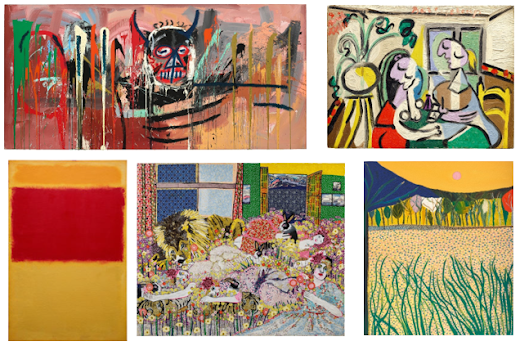 Phillips is pleased to announce that the full lineup for the New York Evening Sale of 20th Century & Contemporary Art is now available online. Poised to be the most successful sale in the company’s 226-year history, the auction will be led by titans of Modern and Post-War Art, including Jean-Michel Basquiat, Pablo Picasso, Mark Rothko, Yves Klein, and Helen Frankenthaler.  Featuring a strong Contemporary selection as well, the Evening sale provides a rare opportunity to acquire works by some of the more in-demand artists of today, including Matthew Wong, Amy Sherald, María Berrío, and Anna Weyant. Comprised of 37 lots, the Evening Sale will take place on 18 May at 7pm ET at 432 Park Avenue, following the exhibition, which opens on 30 April.

Jean-Paul Engelen, President, Americas and Worldwide Co-Head of 20th Century & Contemporary Art, said, “This season, we are proud to present the most ambitious offering of works in Phillips’ history, a testament to the expertise of our international team and the strong, trusted relationships they have within the collecting community. From Mr. Maezawa’s Basquiat, to the Kusama that was originally in the collection of Günther Uecker, to the Klein that was owned by Charles Wilp, to the Frankenthaler that hails directly from the Mayerson Family Collection, the strong provenance of the works in our Evening Sale cannot be overstated and we are honored to have been entrusted with their sale.”

Robert Manley, Deputy Chairman and Worldwide Co-Head of 20th Century & Contemporary Art, said, “In recent seasons, we’ve seen an expansion of taste in the market. The interest in high-quality, rare-to-market works that extend back into the 20th century is as strong as that for works by artists who are still creating today. Our May Evening Sale celebrates this breadth of demand, bringing together the very best of Modern, Post-War, and Contemporary Art. Helen Frankenthaler’sBlue Dance and Pablo Picasso’s Figures et plante are offered alongside Carmen Herrera’s Basque and auction newcomer Justin Caguiat’s Doll 3 Eros, presenting collectors an unparalleled selection of works across all interests. We look forward to welcoming collectors into our exhibition and saleroom at 432 Park Avenue.”