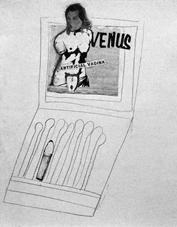 It is with great pleasure that we invite you to come see Richard Prince’s early works from Saturday July 7 until Saturday September 1, 2012. The opening will take place Saturday July 7 from 6 pm to 9 pm.

Richard Prince, internationally known American artist, particularly famous for his re-photographed Marlboro’s advertisements and for his series of Nurse paintings, is an expert in appropriation art and probably the artist who counts best America’s fin de siècle.

However, the focus of the exhibition is put here on the years «before the appropriation», and more precisely on the years 1973 and 1974. The works shown at the gallery were collected in the early seventies by Angus Whyte, Richard Prince’s first art dealer. Etchings, collages, monoprints, drawings and letters are examples of the techniques the young Prince has experimented.

On one hand, Flavored Letters, written in 1974, can be considered as Mail Art, an artistic movement that many of the artists of this era have practiced; Richard Prince showed a significant interest in researching the artistic expressions of his time.

On the other hand, transfer technique, the intermediate process between the collected and the distributed image, is recurring in his work, almost systematic. This clearly announces what appeared later: Richard Prince’s trademark, appropriation.

These early researches testify to the artist’s integration in conceptual concerns of this time and prefigure works that will make Richard Prince an artist with a remarkable individuality. The exhibition Richard Prince: Pre-Appropriation Works, 1973-1974 enables us to discover the premises of Richard Prince’s art, back to the origin of his creation.

We warmly thank Angus Whyte and David Platzker for their close collaboration in the development of this exhibition.

For more information about the exhibition, please contact us by email info@micheledidier.com or by phone + 33 1 71 97 49 13.

The gallery will be closed from August 7 to 22, 2012 included. From August 23 to September 1, the gallery will adopt a summer schedule, which means that it will be open from Thursday to Saturday, from 12 am to 7 pm.
Posted by jamie.jamieforbes@gmail.com on June 27, 2012